Prince George turned 2 today! You must have heard – it’s splashed all over the news. Far out, that is one cute kid! I recall when he was born, being glued to morning tv, hoping for any details or to get even a glimpse of the new prince. He didn’t disappoint then and he doesn’t disappoint now. Little George is completely adorable, looking rosy, dapper and just perfect in every photo. The Palace released this official photo of him to celebrate his 2nd birthday. It looks as though he has inherited the best features of both his parents and is just as cute as a button.

While the little tike may look like perfection, the birth of Princess Charlotte in May made him a brother, a role which comes with certain instinctive behaviour, royal or not. In my opinion, brothers inevitably annoy their sisters. Whilst girls can and do tease their brothers (I certainly did, as does my eldest daughter) it seems somehow less compulsive. In my experience, boys seem to have special annoying powers. My brothers delighted in provoking me during childhood and now I see it in my son, who is nearly 7. The means by which he likes to torture his sisters are developing at an impressive rate. He likes to poke his tongue out and make faces or will takes Miss 2’s teddy from her to kick around the house like a soccer ball. He pokes the girls in the car when he thinks I am not looking or hugs them with a bit too much vigor. Miss 2 will often scream when he approaches her in anticipation of whatever she thinks he might do. Lately he has graduated to emotional mind games. Fabrications he has told Miss 2 include:

And worst of all was telling his 2 and 1/2 year old sister the other night as she went to bed that tomorrow was her birthday and she was having a party. The excitement of her impending celebrations, complete in her mind with balloons, presents and a cake, was tragically short lived, and the boy had to be punished. Although his behaviour is often just the result of excessive mischievous energy and not meaningfully malicious, I’m exhausted from it all. I feel as though I am trying to break in a wild stallion.

As the only girl of five children, I am very familiar with these types of annoyances. Sadly, I never got the sister I always wanted. I recall very clearly when my youngest brother was born. I was nearly 5 and instinctively felt this was my last chance for a sister. I was hopeful, determined even, that this baby would be a girl. When 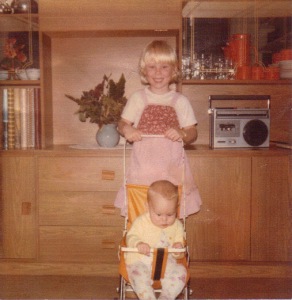 we got the phone call that a boy had been born, I burst into tears. I was so devastated that I went to stay with my grandparents rather than see the baby. After a week or so they talked me round and then took me to a toy store to choose something for my tiny, new brother Richard. I eventually got over it and settled with being able to push him around in my toy pram like a doll, as pictured.

Would life have turned out differently for me if ‘Richard’ had been ‘Rochelle’? I’ve often felt sad that I never had a sister: braiding each other’s hair, sharing nail polish and shaving each other’s legs…that’s what sisters do, right? But unfortunately, testosterone dominated our home and my brothers loved to torment me in many ways. Sassy as I was, I gave back as well I could but my father was old school. It didn’t matter what his little angel did, there was no excuse for a boy EVER to hit a girl. If the boys even laid a finger on me Arnie would turn Terminator-like and there would be hell to pay.

Subsequently, their brotherly misconduct was more emotional. I have large teeth, even for a grown woman. Imagine large adult teeth on a 10 year old girl. Add a moderate overbite. The result was regular name calling, specifically ‘Bucky Beaver’. And whenever my parents weren’t looking, they would make a buck teeth face at me. One particular day we were having a professional family portrait taken. As I was smiling for the photo, one of my brothers called me that dreaded moniker in front of everyone. The humiliation and pain was acute. I broke down sobbing. The portrait that resulted shows me looking sullen with red puffy eyes and an indisputable broken spirit. It was a traumatic day for me and is burned in my brain. Thank the Lord for the braces that came 5 years later and exterminated ‘Bucky Beaver’ for good.

We got through those tumultuous times and I get on now with my brothers – I wouldn’t swap any of them! And although I will never have a biological sister, I am grateful for the beautiful sisters-in-law I now have. They mean so much to me that if any of them ever felt like coming around to shave my legs, they would be warmly welcomed.

Little Prince George will grow up with a sister to poke, prod and tease. Because beneath that angelic smile is still a little human boy. I predict that sibling life in the palace may not be all that different to life in the outside world. I can imagine him kicking Princess Charlotte under the royal dinner table while the Queen sips her tea, pinky erect. But then they’ll grow out of it, like my kids. Someday my girls will like their brother. Someday all the annoying boisterousness and emotional turmoil will be distant memories. But until then, ‘brother’ and ‘bother’ will generally be interchangeable terms.