In many homes there is a ‘fun’ parent and a ‘stable’ parent. The gap between them can be wide or narrow but it exists. I’m going to claim it: I am the ‘fun’ parent in our house. It’s not my fault, I was born this way. We have impromptu dance parties, sing ridiculous songs, play games and do crazy obstacle courses, often at inappropriate times. George is the ‘stable’ one and often the ‘bad cop’ to my ‘good cop’. If there is a plan to suddenly spring-clean the playroom, leading to outcries from our children similar to that of the Hebrew slaves in Egypt, it was generally instigated by George. If the plan is to scrap homework for the night, go out without shoes and get ice cream…well, that would be me. I am not saying that George can’t be fun. Of course he can. He is an extremely loving, patient and devoted father with an incredible endurance to spend quality time with our children. He will sit down for hours and draw with them, do lego or other lengthy & monotonous activities that would have me tearing my hair out with boredom. This is typical ‘stable’ parent behaviour – generous, kind and sincere. Their moods are more tempered though which means they’re often not as lively and amusing as the quintessential ‘fun’ parent.

But there is a dark side to the ‘fun’ parent that no one talks about. Fun parents can be manic and too crazy at times. We have short attention spans and are prone to mood swings. One minute we may be totally frenzied with excitement but then the moment is gone and we can’t be bothered anymore with the activity. This can leave hyped up kids dazed & dejected and the poor stable parent has to come in and clean up the emotional debris.

My father was definitely the fun parent when I was growing up. He also had a few mood hats and could switch from a fun-machine to a drill sergeant at a moments notice. After heavy rainfall he ran contests as to who could go out into the mud and get the dirtiest, with a delicious sugary prize for the winner, as seen in the attached photo, t 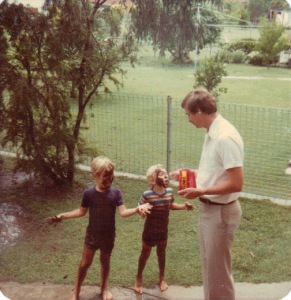 aken circa early 80’s. My sweet mother would watch, smiling patiently, but knowing she would be cleaning up the mess. He used to do treasure hunts round the yard for us that attracted a crowd of jealous neighbourhood kids who wished their dads would be half as awesome. Or at any given moment we could suddenly be shoved in the car and taken to run up and down the sand dunes in weather-inappropriate clothing. Bliss! And there was no end to the things we could get away with when our ‘fun’ parent was wandering around the house, deep in the intellectual hypnosis that usually accompanied his relaxed persona. Some of my brothers were avid surfers who liked to skip school and go surfing. Dad home? No problem…just duck out the window. My father, walking up the hall one school morning happened upon one brother passing his surfboard out the window to his fellow truant and attempting to climb out himself.  “Next time use the door” yelled my Dad at them and continued on his way.

But other times his mood would change and he would turn into the Sherlock Holmes of criminal observations. “Who’s left this bowl of half eaten cereal in the lounge?! Right, no TV, food or AIR for anyone til it’s cleaned up and don’t let it happen again!!!”. Although my Dad and I are very different in many ways, we do have these similarities. He was not a crazy, unstable parent by any means but he certainly did display many of these ‘fun’ parent characteristics and has passed them on to me. In the blink of an eye my bewildered children can watch me switch from Fraulein Maria to Captain Von Trapp and they never really know which persona will be getting out of bed to parent them each morning.

Some homes have either 2 competing fun parents or 2 stable parents. To the former: Ouch! Your house is a circus. Good luck with that. To the the latter, you neither want nor need my advice. You are happy with your schedules, jigsaw puzzles and enclosed footwear. Please just don’t forget Christmas, OK?

But my advice to other ‘fun’ parents in a ying/yang relationship is this: you can be a bit crazy and flighty. Admitting this to yourself is step 1. Realise that when you take your kids to heights of ecstatic happiness and suddenly pull the rug from under them, they may end up sad and confused. And just as importantly, respect your co-parent. Their reliability is your saving grace. You can only be the ‘fun’ one because they are willing to be the ‘stable’ one and pick up your slack…and they probably love you for it because that’s who they are, poor sods. So please take some of that crazy and lavish your ‘stable’ partner with the benefits. If you want to be the mad march hare, keep that workhorse fed & happy and they will continue plowing the field…and everybody wins.

3 thoughts on “The Dark Side of the ‘Fun’ Parent”