This week my eldest child turns 10. Each year on the days leading up to her birthday, I can’t help but dwell on the memories of the botched attempt to eject her from my body. Her birth was a disaster. An unmitigated, elongated, unarguable train wreck. To sum 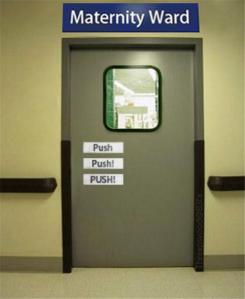 I won’t ask you to join me in dwelling on the terrible memories that haunt my dreams about this time each year. But here are some other things I have learned from, or remember about childbirth and the first few days afterwards.

After my experience, I don’t understand birth plans. They seem about as useful as attempting to make a weather plan or making a flight plan when you’re not the pilot. I’m not much of a planner but if you are and you’d like to have the illusion of control, perhaps mentally renaming it a ‘Birth Wishlist’ may limit disappointment if things don’t go exactly as you desire. Writing it on pretty paper may help. Help you, I mean. Baby doesn’t give a toss.

My first childbirth experience was as loaded as an average Saturday night at Charlie Sheen’s house. I had every possible drug that was offered to me and begged for whatever wasn’t. I was like an over-sized, labouring Oliver Twist. Because my labour was so long I was eventually given the full cocktail – gas, pethidine, an epidural and the icing on the cake – a general anesthetic because I could feel them stitching me up during my caesarean. Some women talk about not having drugs like it’s a badge of honour. I don’t get it! If I have the choice of being in immeasurable pain or being in no pain & feeling delightfully high, why would I choose option A? I’m not too proud to admit that I needed drugs after 38 hours of labour. In truth, I wanted them after 38 minutes. Would I like a needle the circumference of a jousting stick injected into my spine? Do you even need to ask – heck YES!

To sum up, drugs during childbirth = Thumbs Up Emoji

3. Your Catheter is Your BFF

Each night I wake up to pee. Each evening I need to consider my fluid intake…Do I drink more so then I’ll wake in the early hours of the morning or do I drink less so I wake around 5am which means I may not be able to get back to sleep and so on and so forth. It’s exhausting. I’ve dreamed of adult diapers but George has said no. He can be so selfish sometimes. So imagine the bliss of having a catheter for a whole night! I could drink any amount of fluid and never feel the need to take a leak. If like me, you have to have a caesarean, which means a catheter, look at the glass half full. And then guzzle from that glass because there will be no need to get up!

I remember clearly the first time my milk came in. Whoa mamma! It was so sudden it shocked me. I went to sleep after a feed one night, woke up in the morning and the milkbar was twice it’s original size. They were as huge as rockmelons and about as hard. I recall looking in the mirror at myself in the bathroom, just speechless. And they dripped like a rusty tin bucket. I would go through a trolley load of those nursing pads in the next month. I was so huge that I had to get poor George to go and buy me new maternity bras in a much larger size. He took it like a champ though and returned with some quality merch that could have been mistaken for yacht sails. The old ladies in Myer thought he was quite a catch to be out on such an errand. After my milk settled down the new bras turned out to be a bit too big but luckily I was able to use them as a hammock swing for my newborn child.

A few days in when the euphoria of meeting your perfect little new human and the adrenaline of the birth have worn off, things can start to get a little blue. I’m not talking about anything serious or long term here, just the melting pot of sleep deprivation and raging hormones that lead to emotional turmoil. All your hubby needs to say is something like “Do they validate parking here?”, “Are you going to finish that jelly?” or something equally innocent and you could possibly break down into a sobbing heap. Visitors, especially those of the male variety, beware. Enter at your own risk and don’t poke Mamma bear.

As you know, I am a TV enthusiast. Forget that rubbish little hospital TV mounted so high onto the wall that giraffes could watch comfortably. I say BYO entertainment! My laptop accompanied me into hospital each time and I binge-watched several TV series. With food being brought to me and baby by the bed, all I had to do was get up to pee (once my dear friend was taken away). Guilt free TV watching with my newborn baby at my bosom – such a beautiful bonding time!

Celebrate not being pregnant anymore with all the contraband you can get your hands on. One thing I missed when pregnant was McDonalds soft-serve hot fudge sundaes. Soft serve ice cream is a no-no so I refrained for 9 months for the well-being of my unborn children, the little fun-stampers. One night after one of them was born, George came to visit me in hospital. I had asked him to bring me a sundae. He arrived, sans sundae, with the excuse that the local Maccas ice cream machine was broken. My devastation was obvious. I’d just had major surgery to get his child out of my body after carrying her for 9 months. The least he could do was immediately leave the room, drive the 5km to the next McDonalds with a working sundae machine and return with it post haste. And that he did.

The other thing that was enjoyed was a small glass of my favorite tipple. As alcohol can go through breast milk it’s best to drink it as far before the next feed as possible. Which basically means just as you’re finishing the current feed, raise your glass. Hence, if you happen upon a new mother breastfeeding and simultaneously drinking a glass of wine, she is simply being responsible.

8. Be Thankful and Pay it Forward

Being not an overly emotional person, I know, rather than feel, that I should do good. But one organisation that actually awakens real emotions within my soul is the Hamlin Fistula Hospital in Addis Ababa, Ethiopia. The tales of the women there are tragic. And the subsequent success stories because of their amazing work are truly triumphant. If I had been living in a less fortunate nation when giving birth to my first child, she could have been stillborn and I could have ended up with a fistula like many of these poor women. But thanks to easy access to hygienic and competent medical care in the face of complications, I can enjoy jumping on a trampoline with my living child and stay powder dry. I wish that for all women! If you want to find out more or to donate, check them out at http://hamlin.org.au/ or follow them on facebook at https://www.facebook.com/DrCatherineHamlin/?fref=ts

Ladies, there is much more I could say but we don’t have all night so I will leave you now with my favorite movie birthing clip from the film ‘the Back Up Plan’ starring J-Lo (a totally underrated flick in my opinion), enjoy. For those who are about to give birth – good luck. For those who are looking at childbirth in the rearview mirror – rejoice. I will say it again: Rejoice!