Jane Austen said ‘Surprises are foolish things. The pleasure is not enhanced, and the inconvenience is often considerable.’ I love you Jane but I’m sorry, I couldn’t disagree more. I LOVE surprises, both giving and receiving them! I don’t mean surprises I know are coming – they just make me crazy. I love surprises that are completely out of the blue…WHAM, take that!

I love to surprise George. I delight in bringing him home random gifts when I’ve been out shopping. It could be a t-shirt. It could be a donut. It could be a mug. I recently booked him in for a massage without his knowledge and just added it to his diary, setting a reminder pop-up for an hour beforehand with the details. He was a good sport about it and went to see ‘Paul’ the middle aged masseuse but told me afterwards that if anyone was going to rub down his naked body, he’d prefer it to be me. Fair call. Verdict: surprise fail.

The best surprises are birthday surprises. Last week was George’s birthday and beforehand we’d  shopped together for his birthday present. I felt it was mandatory that another surprise gift was purchased to be opened on the big day. I decided on a men’s dressing gown. We’d just had a cold snap and there’s nothing like being ensconced in a warm, downy dressing gown. Mine is hot pink and is fluffy enough to smother a baby seal. I chose George a thick, luxurious, navy gown. He unwrapped it and was evidently surprised. “Oh. A

dressing gown. Wow.” he said, very obviously faking enthusiasm (George Clooney is no George Clooney). In his mind, dressing gowns are only worn by the elderly. To please me, he tried it on and sashayed about (I may be embellishing…it’s possible he simply walked from the bed to the door and back). As the smooth material caressed his body, he began to get it. Since then he has been a faithful wearer of the gown, and keeps it on the floor next to his bed, and close to his heart. I picked it up the other day and hung it in the wardrobe. The following morning he demanded urgently “where’s my dressing gown?!?!”. I calmly explained it was hanging in the wardrobe. The relief on his face was palpable as he went to retrieve it. He put it on, basked in the comfort and warmth it provided and then proceeded to strut around like a young Hugh Hefner. All I need are some implants and a hot tub and it’ll be like the playboy mansion around here. After the initial shock, the dressing gown surprise has been a hit, much to my delight. See Jane – birthday surprises rock!

I recall clearly receiving my best birthday present ever. It was a surprise I had NO idea was coming. I had desperately wanted a dog since our border collie had died of a tick several years earlier. I had consistently asked my parents for another dog and they had consistently said no. I promised to walk the dog, look after it, pick up its doggy do, even pay for its food out of my pocket money…but still the answer was no. I resorted to desperate measures and wrote my parents a letter from God. It was simple and to the point:

I suspected they knew it wasn’t God communicating with them in letter form because no dog was forthcoming. Time passed and I had almost lost hope. Then one day close to my 14th birthday, something special happened. I came home from school but my parents weren’t home. I went into my room and sat on my bed, probably to read the latest Sweet Valley High and wonder if Jessica’s latest scheme would bear fruit. My father appeared suddenly and sat down. He began “If we bought you a dog, would you feed it and change its water every day?” 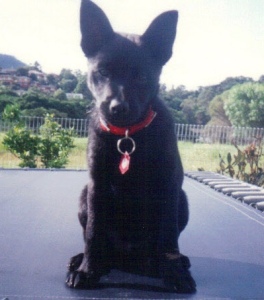 “Yes of course.” I replied, surprised.

“And would you walk it every day.”

“And would you pick up after it?”

Usain Bolt could not have made it to the garage faster than I did that day. My mother was in the car with a cardboard box on her lap. Inside was a jet black kelpie puppy. An early birthday present. I squealed like a piglet and grabbed the little ball of fur. ‘Boris’ and I quickly became completely devoted to each other. Our love affair lasted his entire life.

Boris was the best gift I ever got and the fact he was a surprise was the icing on the birthday cake. And although initially resistant, George has embraced his surprise dressing gown with vigor and perhaps more passion than is appropriate. I am also convinced that Mr Darcy would have worn a dressing gown, one prestigious enough for a man of his class. So perhaps if Jane Austen had answered an unexpected knock at the door to find Mr Darcy standing there in his dressing gown, her opinion of surprises may have been slightly more positive…Just a hunch.